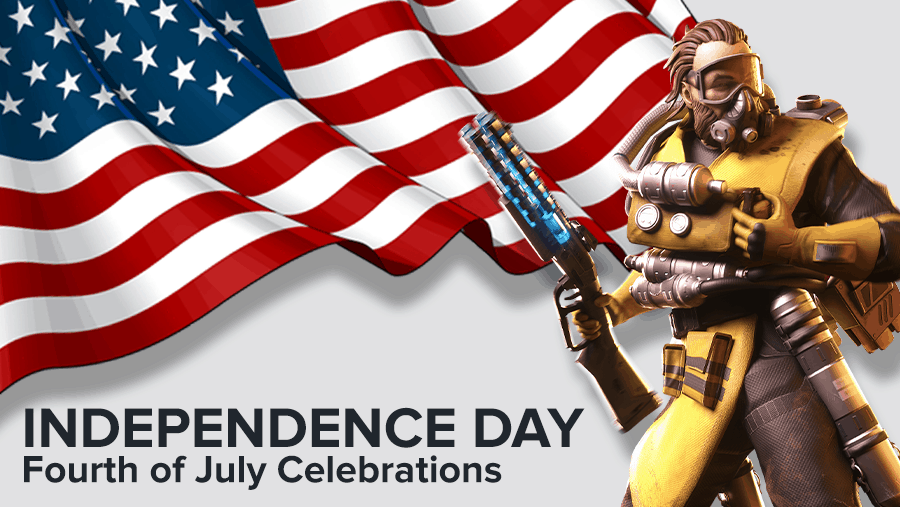 Check out the trailer here

The 4th of July marks a historical day commemorating the declaration of independence of the United States! In true fruitlab fashion we have organised another, yes another, jam packed day of events to keep your weekend entertaining and full of PIPS!

Unlike previous events we have hosted, we have decided to get a little more competitive this time around! Throughout the day we will be hosting tournaments for a variety of games, but with a little twist added to spice things up a bit!

Firstly, we will be hosting some major tournaments throughout the day for some big name games such as Rocket League, Fortnite, Warzone and Apex Legends. We will host tournaments for these games which will carry their own PIP prizes. However! The scores from each tournament will be kept and added to an overall table in which we will be putting different regions head to head, to find out which region is the best gaming region of fruitlab’s 2020 Independence Day extravaganza!

How might this work, you may ask? Well, that's why we are here to explain every detail and relevant piece of information so that you can best aid your region and conquer fruitlab!

To start with, we will be breaking down fruitlab into separate regions with team captains! To simplify things we have broken down the regions into Europe, US and Rest of the World!

You must apply for a team to take part. This is so that we can log all of the players, keep track of scores and enter your fruitlab account into the 500k PIP raffle giveaway for the winning team!! If you want to take part and would like to apply, please click here.

Fortnite will be Solo’s and will be played across 3 games. Each game will be played on a different server. The top 10 positions will earn points for their regional team. However, if you manage to place in the top 10 whilst playing on an away server, you will be awarded more points. Please refer to the table below to understand the points system.

PIPS Will be awarded for top 8 placements.

Similarly to the Fortnite scoring system, Rocket League will also be played in 3 separate tournaments across the 3 respective servers with points awarded for placements! However, points will only be awarded for First place, Second place and Semi-Finals finishing positions.

PIPS will be awarded for winners and runners up (Usual Rocket League structure).

You must squad up with teammates of your region, you will have 2 hours to achieve the highest kill game you can and send in your screenshots to the team captain! In this gamemode it is not possible to put you head to head. So you must join a normal Battle Royale game and get the most kills! Winning a match will not provide any bonus! Only kills will give you points!

The top 5 scores will earn you points (only one entry per team). You must take a screenshot of your endgame screen, displaying your kills for the game. The screenshot must also contain proof of date and time for your entry to be valid, so make sure you don’t forget to include the date and time!

PIPS will be awarded for 1st to 3rd!

All points acquired throughout the day will be totalled by region. The region with the most points at the end of the day will be crowned the regional champion with all the bragging rights that fruitlab has to offer!

If your team won, all users from the winning team that participated in any of the 4 major tournaments mentioned above will be entered into a raffle where 5 lucky users will win 100k at random!

In case that wasn’t enough for you, we will also be hosting some minigame style tournaments in juice throughout the day!

Fruitlab Independance Day Flag! - We’re back again with another design competition for you creative users! We want you to create your best fruitlab themed independence day flag! You can do so either on the computer or drawn by hand! The competition is open now and the designs will be judged at 8PM BST Saturday! So stay tuned, to see all the amazing designs from your fellow users!

Scribbl.io - We will create a custom lobby and send the link out in juice. A maximum of 12 players can join per lobby, so we will host a few lobbies throughout the hour! Prizes will be rewarded for players that score in the top 2!

All our events for the day will be streamed by each team captain, allowing you to keep yourselves informed with all the latest updates as to which team is in the lead and to watch your stars of fruitlab compete in what is to be the biggest and most intense day events fruitlab has ever seen!

We look forward to seeing the intense competition unfold on Saturday, see you all there!