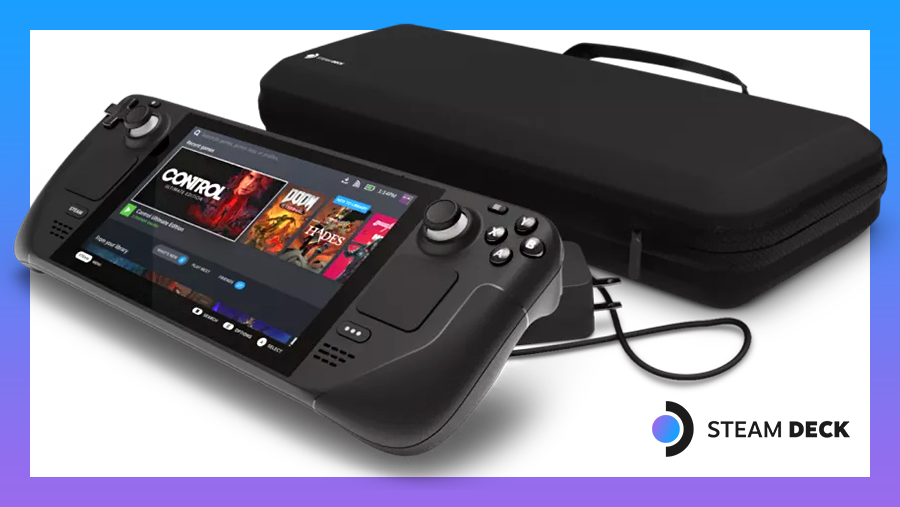 Following the potential rumours of Valve entering the portable gaming market stemming from around May, they've finally announced their upcoming console, the Steam Deck, it's a handheld gaming PC that will be arriving at the end of this year!

The Steam Deck has a size similar to a slightly larger version of the Nintendo Switch, however, it has the processing power of a full gaming PC! It uses a modified version of Valve's SteamOS, the interface for the Steam Deck will be familiar to anyone who's played on a console, or users of Steam Big picture. You also have access to a computer desktop where you can install third-party applications, including non-Steam games and programmes.

On the tech side, the hardware that the Steam Deck will be running includes: A 7-inch 1280x800 resolution, 60hz LCD screen, a custom AMD APU featuring a 4-core, 8-thread CPU paired with 8 RDNA 2 compute units for the GPU, and 16 GBs of LPDDR5 RAM. This dwarfs the Switch in comparison, allowing it to run modern games at a very impressive standard for the size of the console. From video previews of the console, it's clear that it will have no issue running games like Jedi Fallen Order at high graphical settings with no issue whatsoever! Just like on PlayStation and Xbox, you'll have the ability to suspend running games and resume them when you decide.

The controls section of the console sees buttons and joysticks on either side of the screen allowing for use just like a regular gamepad! The thumbsticks are capacitive, which means that they can tell when your fingers are rested on top of them. The trackpads beneath the joysticks allow for mouse inputs. The buttons found on the back of the console can be bound to anything you choose. The display itself is even touchscreen, just like the Nintendo Switch!

The Steam Deck uses Bluetooth to support any device that you may choose to connect to your PC normally, so connecting your AirPods for on the go playing will be no issue whatsoever! The console allows for docking to connect it to an external display, or even a mouse and keyboard to be used as a regular PC. Three different models will be available upon release, however, the only difference between them will be their storage size and speed. The graphical capabilities will remain the same throughout the models. The base version of the console will cost $399 and come with 64GB of storage, next, the $529 model comes with 256 GB of storage leading to the final model costing $649 with 512GB of storage, as well as an anti-glare etched glass screen. The two more expensive models will also feature NVMe SSDs, allowing you to load games at a much faster speed.  There's also room for a Micro SD card that can be used to expand the console storage even further than can already be seen within the device. Each device will also come with a hard carry case.

There's currently no set in stone release date for the console however it will be releasing around the holiday period of 2021.

Will you be picking up one of these portable PC gaming consoles? Or perhaps you're happy with what you've got already? Regardless of your answer, we want to hear all about it in Juice!