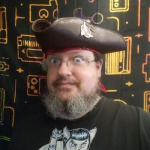 #Pirates #Sega #Gamecube
All my links in one place: https://tapmybio.com/capnmintbeard
Skies of Arcadia Legends is an enhanced port of the Dreamcast RPG Skies of Arcadia. The game features slightly improved graphics, more weapons, and extra side missions. The subtitle "Legends" was added to distinguish it from the original release of 2000, coming out two years later. The game was also to be released for the PlayStation 2, but was canceled prior to the GameCube release.